January is usually the longest month of the year, feeling like it has at least 372 days in it.

January 2020 has felt quite different.

Yes it’s 2020. I’m still having trouble typing and saying it. Sounds like the future doesn’t it?! Twenty Twenty. Well if we are in the future, it still feels pretty backwards. Why don’t I have a hover wheelchair? Why are there still steps everywhere? And why do people still assume I cannot speak or communicate?!

I’ve lived in five different decades now, how old does that make me feel… I’m not sure which is my favourite, but the 2020’s haven’t started off well.

So I said January has felt quite different this year, thats because I spent the first chunk of it in hospital. With flu.

I’ve never had flu before, not to my knowledge. I pride myself on getting the flu jab, and I did this winter too. Yes I still got the flu. It’s not uncommon, there are many different flus, so I’m told. I was also told that my flu could have been much worse had I not got the jab. So please everyone get the jab, because if I hadn’t, who knows how long 2020 would have been for me. Flu hit me hard enough as it is. Also, who knows, if everyone got the jab then maybe I’d have never got flu, maybe.

So I said flu hit me hard, everything hits you hard when you have a cough more laughable than a cat’s. My muscles are crappy, and that includes the muscles I need to breathe. When the breathing became a struggle I called 111. Well my Mum did, I hardly had the breath or energy to talk. They sent an ambulance, as I’m a ‘vulnerable’ human, and am I glad they did.

Because I didn’t know I had flu, until they did the test in hospital. Wow that test is awful. A pipe cleaner shoved up your nose and down the back isn’t pleasant. Nor is flu. More reasons to get the jab. You know you still can. It’s still winter and flu season.

I spent 9 days in hospital being treated by an extremely overstretched NHS. The NHS is amazing, as are most of the people that work in it. I wouldn’t be here without them. This time or the many times I’ve relied on it in the past. Daily even. But it is stretched. Bursting at the seams. Literally. Like a coat that doesn’t quite fit because the measurements were wrong and you couldn’t afford a bigger one. Buttons are popping, pockets are wearing and things are getting lost in the lining. Only it’s people that are getting lost. And people are more important than pennies, lip balm and sweet wrappers.

I’d talk about politics, but I don’t know where to start. Also, I still don’t have the energy for that.

Lets just go back to the bit where I said it’s 2020 and people still don’t think I can speak for myself. If you have a disability and want to feel more disabled than ever… have a little city break in hospital. It’s demoralising to be spoken over on a daily basis, have people talk about you with you there. A doctor asking the nurse beside me if I can communicate. I’m here, right here.

I’ve been home almost two weeks now and I’m still not quite there, not at my normal. Whatever that is.

I left the house yesterday for the first time in weeks, wow the air is cold out there.

I missed two birthdays, and felt awful for another. Who knew January held so many plans that I’d have to cancel.

A few days after I returned home a parcel arrived in the post. A hamper containing gifts for recovery. I have the bestest group of friends.

I started on the super fruit tea first. With ‘super’ and ‘tea’ in the title I was sure to get a boost. A bit of placebo I’m sure, but delicious indeed, I’ve almost finished the pack. I could do with some more of these.

The biscuits took a couple of extra days to temp me, not wanting to overdo it on the throat and set the coughing off.

It’s people that make a life. And tea. And cats in boxes. 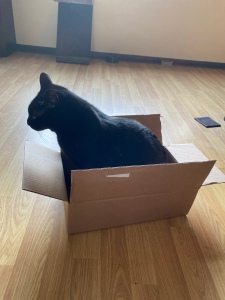 So it seems I've decided to/been persuaded to start a blog. Whenever friends and I are out we always end up discussing, critiquing, analysing where we are and what we are doing. From talking about the food we are eating, the soap in the toilets, the awful bus journey to our destination, anything and everything we encounter. Because of my disability (SMA type2) many of the situations we get into, issues we discuss and laughs we have can be due to wheelchair access. Often me getting stuck in mud or shingle, or me making my way through the most cram packed shop you can imagine, wondering how I am ever going to find the way out again! I aim to write a blog that describes these dramas, tells stories of our laughs, adventures and frustrations, while giving detailed information on accessibility and wheelchair access. Also I like tea. ALOT. The quality of the tea often determines my return just as much as the accessibility. View all posts by gemmaorton

32 thoughts on “Friends, Flu and Frustrations”