If we were having coffee you may need a pad and paper to take my order. I’m the kind of person you regret asking if they’d like a coffee while out, because when given the option I have the works. Plus I’m fussy and awkward and rather specific. It’s not all my fault though.

I’ll have a skinny-decaf-toffee-nut-latte-with-cream-and-not-the-sugar-free-syrup-because-calories-aren’t-the-reason-I-have-skinny-and-I-think-sweeteners-are-evil. I’ll also have a paper cup, unless I’ve brought my own, as the coffee shop ones are never practical. Saving the planet one coffee at a time with my reusable thermos. Don’t worry though, I’m balancing that good act out with my plastic straw use. Although I don’t use them at home now, I use metal ones, I still have a stash that I carry around to use while out.

If we were having coffee you’d struggle to stop my plastic straw rant. Why is it that still after two years of #TheLastStraw have we still only focused on straws?! I had grapes the other day that were wrapped in three types of plastic. Oh and Christmas. How much of that extravagance is recyclable?!

I had a paper straw the other day. In my hot chocolate. Because I need straws with every beverage. Have you tried drinking a creamy hot drink with a floppy paper straw? I think I’d pretty much consumed the straw too by the end of my drink. It turned into papier mache on the way to my mouth. Is there meltable glue in those straws? How many calories does a paper straw contain?

If we were having coffee I’d ask if you knew what day of the week it is? I’m totally lost. The days between Christmas and New Year are some of my favourites, relaxed yet slightly on edge. Limbo. Groundhog Day. My life is defined by structure and organisation. When you can’t physically do much yourself, you have to be super on it and schedule people to do things for you and things to do.

It can be quite the thrill when you don’t know what time you’re getting up or when you’ll next leave the house.

I’ve been colouring. That’s my Christmas limbo thing. Although I started a bit earlier this year, in the pre-Christmas limbo when everything is done and sorted and I’m awaiting the big day. 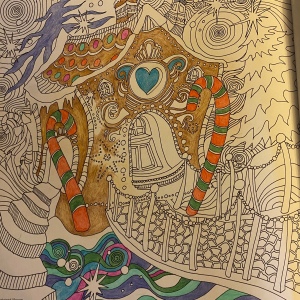 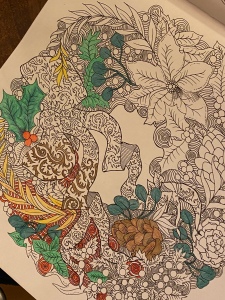 If we were having coffee I’d ask if you had a good Christmas? Mine was a chilled one with plenty of food. There’s still cheese if you want any?

If we were having coffee I’d boast to you about going out two days in a row this week, after not leaving the house for eight days.

If we were having coffee you’d know that not leaving the house for a bit is quite ok with me. I’m good at keeping busy with crafts and Netflix.

If we were having coffee I’d ask if you have any tv binge recommendations?

So I left the house on two consecutive days. The first being a pre booked trip to London for Disney On Ice. Yes I love Disney, it’s my guilty pleasure and I don’t even feel guilty. It was mainly for the nieces. Honest.

The show was great and everything you’d expect. Princesses, talking toys, a suicidal fork, forgetful fish, an annoying ice queen and popcorn for £11 a bucket. No lie. I refused to buy any. There was a row of ice skating Genies and a giant dragon, what more could you need. Cheaper popcorn. 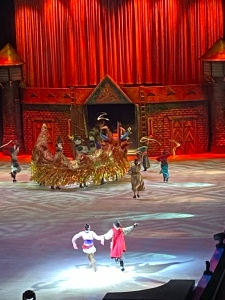 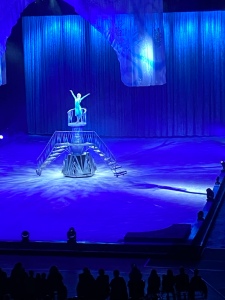 If we were having coffee I’d confess to loving Cats, the movie everyone hates. That was my second day out this limbo week.

If we were having coffee I’d rant too much about critics that criticise something they don’t seem to know. Cats, the poems by T.S. Elliot, Cats the musical by Andrew Lloyd Webber, are trippy and surreal and just about cats. It’s a glimpse into a world going on inside ours. Just a moment of a lifestyle, not a saga or soap opera or action adventure.

Yes they have human hands, feet and faces too. It’s not The Lion King, and isn’t meant to be.

I’m also obsessed with cats the animal, so maybe that helps. If we were having coffee you’d know I have four.

If we were having coffee I’d ask if you’ve been for afternoon tea lately. I went, and I’ve got two more planned in January. Got to keep the treats going during the longest month of the year. January has 263 days yes?

If we were having coffee I’d annoy you with photos of delicious cakes and dainty sandwiches, because other people’s photographs are never as exciting as your own.

It was a festive themed afternoon tea at The Assembly House Norwich. If we were having coffee, not for the first time, you would know this is one of my favourite places. Definitely my favourite place in Norfolk, and I really think they should employ me as chief taster. I’ve said it before, I wouldn’t even need paying. Cake is the best form of currency anyway!

The highlight for me this visit was the brioche roll filled with roasted turkey, stuffing, bacon, and mayonnaise. Like a mini Christmas dinner in every bite.

If we were having coffee I’d tell you how amazing the Coconut Madeleine Snowman was, once I removed his nose and hat. I don’t go much for icing.

If we were having coffee I’d tell you I’m reading my first ever Christmas book. I think. Although it’s not totally about Christmas, December is in its title. One Day In December it’s called. I’ve not got to the end yet, so no spoilers please.

If we were having coffee I’d wish you a happy new year now, because I’ll probably be reading my book and then asleep by 10pm.

If we were having festive coffee in limbo, what would you tell me?