As the title suggests, to celebrate my four years of Wheelescapades, I have four things to tell you.

Who’d of thought I’d make it to year four?

When I pressed publish on this very first post I didn’t know what would happen. Not many people saw it, nobody knew it was there. That’s the thing about blogging. It’s takes work and promotion and determination and consistency. To be read anyway.

There so much out there. You need to have a thing and know your thing and do it well. I’m still not sure I do.

I started blogging four years ago with an aim of changing the world. Ha. Not really. I just wanted to change bits of it. To highlight the access issues faced, that are often so easily solved, but more often not even considered.

Access is law, I don’t think people realise that. Although it should be a given it isn’t. And although not everyone feels it should be praised, I do. Without knowing what’s right, how do you realise what’s wrong.

It’s been a funny year writing wise. Life wise really. I haven’t been anywhere exciting, or anywhere. So the writing has changed a little and maybe become more personal. Thoughts and feelings.

I’ve always wanted my writing to have a part of me in it. Personality. I don’t want it to just feel like lists. Although I have done some of those.

I received a comment recently from a reader that says she enjoys my humour, how I talk about serious subjects but with character that makes it light.

That’s when I knew I was achieving what I wanted to. To be accessible myself. Not distant and from another world. I still feel like a newbie though.

I’ve always listened and taken things on board when they are relatable, comforting or amusing. Hopefully I can continue to be those three words.

Words are difficult. In the writing and reading. Like with a text. It’s can be hard to provide context, emotion or empathy. I’m sarcastic and have an odd sense of humour. Sometimes I come across wrong.

My people are out there, though, and they are who’s important.

I’ve discovered I’m not alone in my thoughts. There’s a whole blogging and social network community out there.

Sometimes others articulate things better and say the things I’m thinking better than I ever could. And that’s ok. Celebrate and share those things too. Life’s just one massive multifaceted conversation.

There will always be a need to highlight access issues and campaign for equality. I hate to say it but I can’t see a time when access issues won’t be a thing.

So you can expect more precarious predicaments from me. Such as getting stuck in lifts, or rating a mass of bums.

So, if you’re a regular you’ve probably noticed the new look. I thought after four years it was time for a little spruce up and redesign.

We all know how indecisive I am, so last week I invited you all on social media to choose from a shortlist of logos I’d designed. It was a closer vote than I expected (maybe my indecisiveness was called for), but the winner was design number 1.

I then worked over the weekend on finishing touches and to create the header that now tops the page of my blog and social media pages.

I’ve dropped the ‘Tales of a life with wheels’ bit, because we know that now. Or you will soon enough.

I adjusted the theme of Wheelescapades blog to reflect the same colours, and feel it’s done great to brighten the place up a little.

What do you think?

Twenty Questions is back

If you’ve been around a while you’ll remember that a couple of years ago I ran an interview series creatively titled Twenty Questions. The title says it all. If you’ve not been around for a while then head on over to take a look and discover some fab bloggers.

After a break of almost two years I missed the series, getting to know the nitty gritty and sharing some bloggers I love.

Twenty Questions will be kicking off again next month and I’m looking for participants. If you’d be interested in taking part drop a message in the comments or contact me on my various social medias.

Lastly I’d like to invite you all over for a brew. That would be a struggle at the best of times, with my tiny house and some of you living on the other side of the world. But with social distancing and all that it’s best we stick to a virtual party.

So instead I ask that if you’d like to join me in a toast head over to Twitter or Facebook where I have started off the celebrations in the pinned post. Share a photo of your chosen beverage and come over for a chat.

Thank you to those old and new, those who’ve stuck around from the beginning and listened to my rambles. Thank you to the fabulous blogging community and those that read each and every post.

Don’t forget you can subscribe by email below or in the sidebar for all the latest rants, reviews, rambles and round ups. 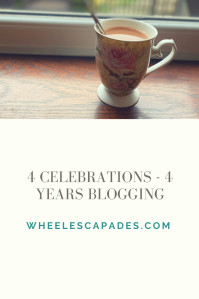