Crafting With A Physical Disability – Finding My Thing

For somebody that can’t move very much, I’m never still. My hands have to be kept busy, and if they’re not busy typing here or crafting then they end up scrolling nonsense on social media, and that’s something I’ve been trying not to do.

I’ve always been a bit ‘arty’. I have red hair and tattoos, so fit the stereotype perfectly. As a child I couldn’t run around or play on the park. Jumping from cushion to cushion and making dens wasn’t my thing. I had to explore my creativity and imagination in other ways. Drawing and colouring was something I could do myself as a child. Only ever being able to do stuff that’s within my reach, I loved being set up with loads of boxes, paper, packaging, glue, pens and scissors. I loved making stuff. Being creative. Designing something pretty. Something I could control. Something totally mine.

Right from school I knew what I wanted to do, second to being a journalist, I wanted to create stuff. In a way I do both now, if only as a hobby.

I studied art and design at college, then went on to complete a BA Degree in Design Craft. I then specialised in print and pattern for my Masters Degree. Yep I’m a Master!

I loved it. I loved the people, the artistic minds, the community, the atmosphere I was surrounded by. Creativity in the air. In those days I did proper art with meaning and everything. I studied local history and used that as an influence for my art. I’d sketch and colour and work with digital processes to create prints for fabric and wallpapers. 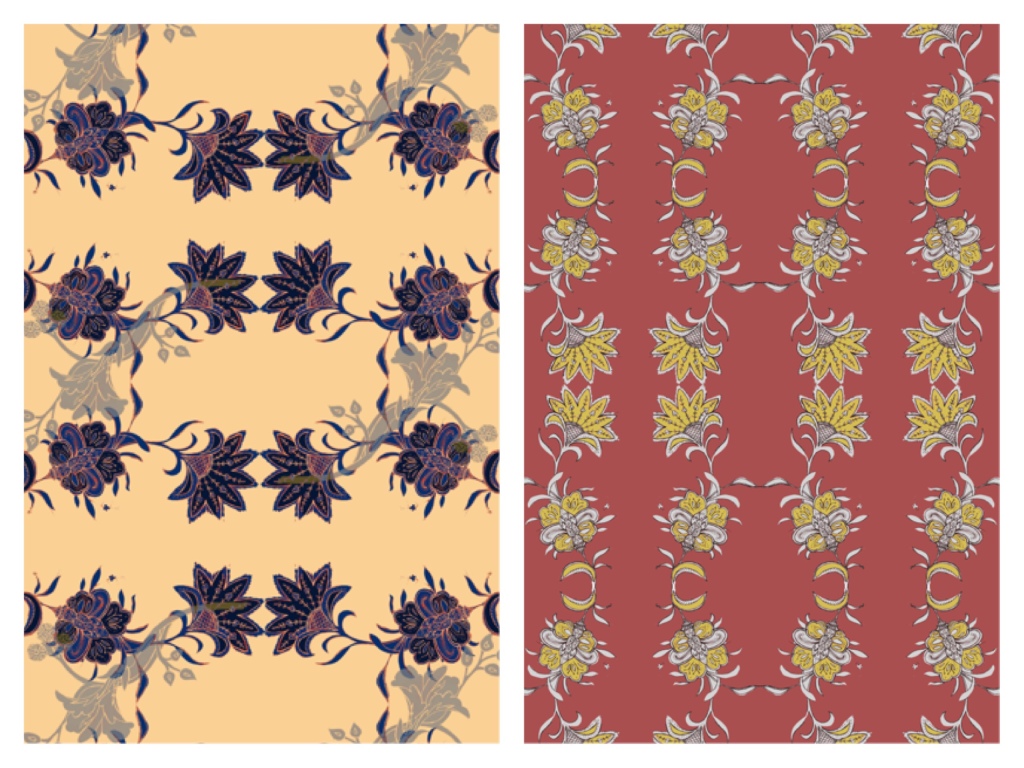 Although I still ‘make stuff’ it’s mostly a hobby now. Like unfortunately it seems to become for a lot of people. I’m somebody that likes to work to a brief, needs a goal for the outcome. I don’t have that now, or the magnificent equipment I was surrounded by at Art School. I also don’t have as much strength, movement, physical ability.

I envy those where art is their main thing. The thing they do. For a purpose other than self satisfaction or therapy. Although that’s great too.

Upon leaving Art School I had a little mini business making jewellery and going to craft fairs selling my wares. This was more a hobby that helped pay its way than anything but I enjoyed the making and the meeting people. It’s the first time I properly used a crochet technique, be it with wire. I’d thread beads on to coated copper wire and manipulate it in to familiar jewellery styles. As with everything it had it’s day and I fell out of love with the making. It became more of a chore, and that’s not what crafting is to me.

Now I mainly create stuff as gifts for friends and family, I’m sure many of them are already wondering what delight they may find in their stocking this Christmas. Not. It’s probably more like ‘oh another lovely crochet gift to find space for’, ‘oh what’s this? What do I do with it?’, ‘another handmade card, great!’. I need some kind of reason to craft, you lucky lucky friends you!

The nieces are appreciative though and give me a never ending list of things they want made. I even crocheted this monster-unicorn-alien thing that the niece designed herself. Because unicorns are everywhere now right?

By the way, just because something is colourful or rainbow or glittery, that does not make it unicorn. I’m fed up with it. The whole word.

I did though, make another unicorn from stripy rainbow socks. Because what else would you use them for. They’re unicorn right?!

I get craft as gifts too. A lot. Because if you’ve already gifted me tea then you gift me crafts, then back to tea again, with the proverbial candle scattered in. I’m a Thirty-Something, what other gifts are there?

Jokes aside, I love craft gifts because they get me trying something new, something I maybe wouldn’t have tried otherwise.

And sometimes something I’d never try again. Like progging.

I made a proggy duck, a lonely duck who will never have any proggy friends. I haven’t given this one as a gift, I’m not that cruel. He’s not quite gifting material, I fear that if he’s touched too much he may fall apart. He can live on my shelf as a reminder of that time I learned I don’t like progging. It’s as violent as it sounds, and even involves a sharp weapon. After cutting numerous small rectangles in felt, you poke them through a woven fabric then back again. Creating a kind of tassel. You do this densely to form a textured surface, in the mean time stabbing yourself and putting fluff everywhere. It’s just like rug making really. And there’s a reason I’ve never tried that. (I do appreciate these gifts, honest!). 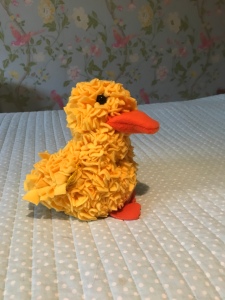 I’ve also gone through the make-my-friends-pets gift stage. This pair of crochet cats look just like their owners. Don’t they?!

There was the button stage, when everyone in the know crafted with buttons. So I made a couple of cushions as Christmas gifts. Usable and decorative, what more could the recipient want.

The first cushion I ever made however was a long project. The largest cross stitch I’d done at the time, I hugely underestimated how long it would take me. My friend, who’s birthday is in May, received this Pop Art pug cushion in August. It’s ok though, that’s when she was supposed to be born, so in a parallel universe I timed it perfectly.

I’m not a quick crafter you see. I’m not quick at much, other than typing on my phone and drinking tea. Those things I’ve mastered.

I craft in slow motion. Small movements for many are big movements for me. A project that may take some a day, will most probably take me a couple of weeks. I tire easily, physically, and have to take regular breaks or my fingers seize up.

I’m more a summer crafter, although some may craft more on those dull winter evenings. I struggle to move if I’m cold. Even the slightest bit chilly.

I can’t craft on the go or anywhere other than home easily. I long to be the old lady I see crocheting on the bus, but the right set up is crucial so I can reach and move and do my thing. I need a table, the perfect table in just the right position. I need all my materials within reach. No bags or boxes of stuff to rifle through.

You won’t catch me painting a 6 foot canvas. Or 2 foot for that matter. But tiny intricate crafts, that’s my thing. Something I can do. Almost alone. If it involves counting and focusing your eyes so much they start to water or you see double. That’s the craft for me. Something fiddly that only involves short distance moving. Within a fingers reach.

I’ve tried crafts that I need assistance with. Scrapbooking, soap making, I even went through a stage of making cake stands, because why not when I love cake. It’s not the same though, I don’t have the same control or interaction. It’s not as personal. I prefer the stuff I can do myself, take my time and chill with. Stuff that then has and becomes a part of me.

That’s when I have the energy to craft without getting frustrated.

Not long after graduating Art School and during my time at Norwich Castle Museum I also collaborated on a book about ‘Picnic’.

I worked alongside the author to create images that went alongside his words.

I enjoy the opportunity to do something different and be in the company of those with similar interests. Norwich has been getting pretty cool lately. A bit cultural. Lots more going on it seems. One of those things recently was Makers’ Month. So over the past couple of years I’ve attended some crafting workshops here.

I was a little nervous to start, it’s been a long time since I was in a ‘classroom’ type setting and learned something new. I wasn’t sure how I’d get on physically and if I’d struggle to keep up with the tasks.

It was great though, and I’ve learned three new crafts. Two of which you’ll find here in last years aims.

The third being needle felting. Now this is a great one if you’re feeling a little stressed or want to get some anger out. Stabbing a ball of felt millions of times was quite tiring for me, I could literally only manage a few minutes at a time and needed to take a few minutes break before I started again. It’s small work though, as in size, which is great for me as once I have all the bits prepared I can go at my own pace repetitively stabbing away. During the workshop I managed to crest this little flower, and plan on needle felting more soon. 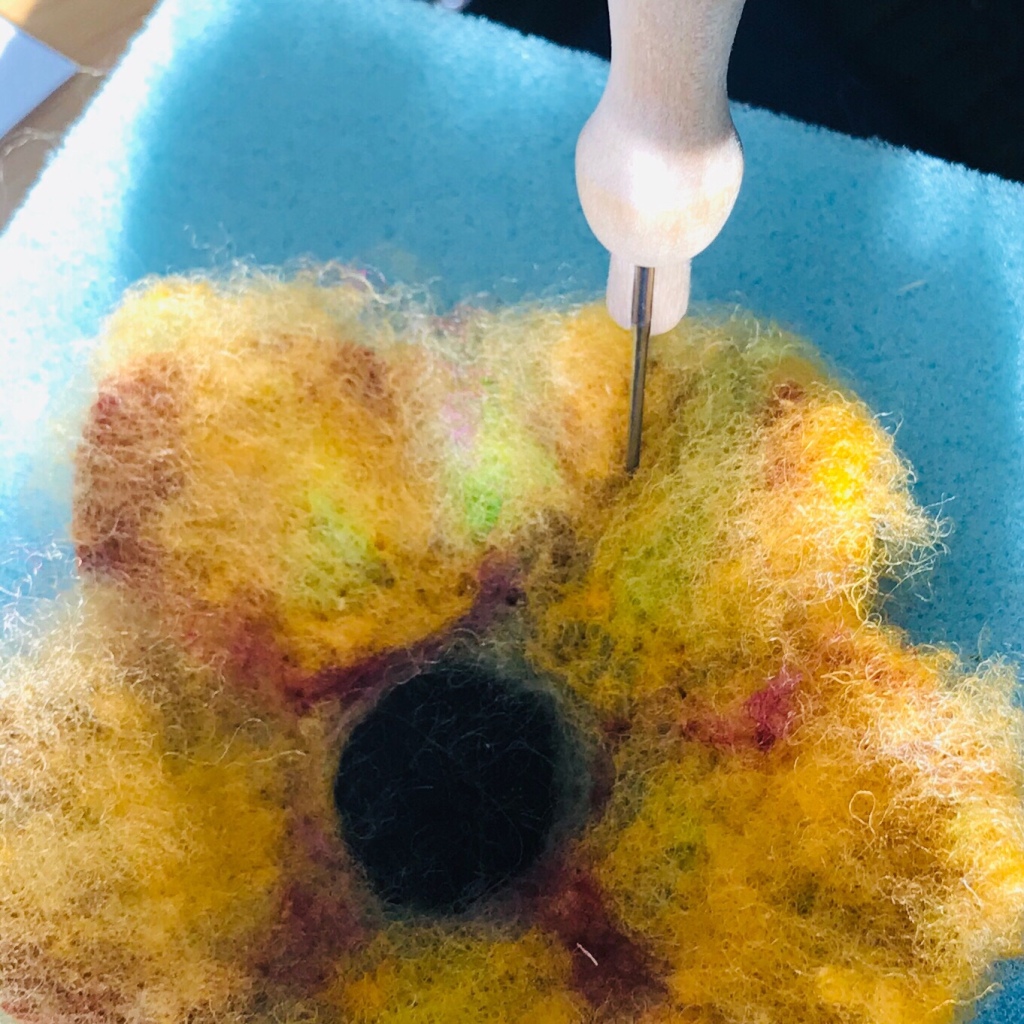 When I want a little bit of chilled creativity, no counting, measuring or risk of being stabbed with a needle, I turn to colouring. Even that I can take a bit too seriously. The perfectionist in me gets frustrated if I go over the lines or the colour isn’t smoothly blended. The artist in me has to get the right combination of colours, contrasting or complimentary. Like it’s a piece of art that’s not going to sit unnoticed in a colouring book for eternity. Until it ends life as recycling.

And Christmas colouring only ever happens at Christmas.

My current go to crafts are sewing and crochet. Both things I can pick up and put down easily. Physically as well as metaphorically. Makes that I can swap between, do a bit if I fancy for an hour but don’t have to set aside a large chunk of time or energy. 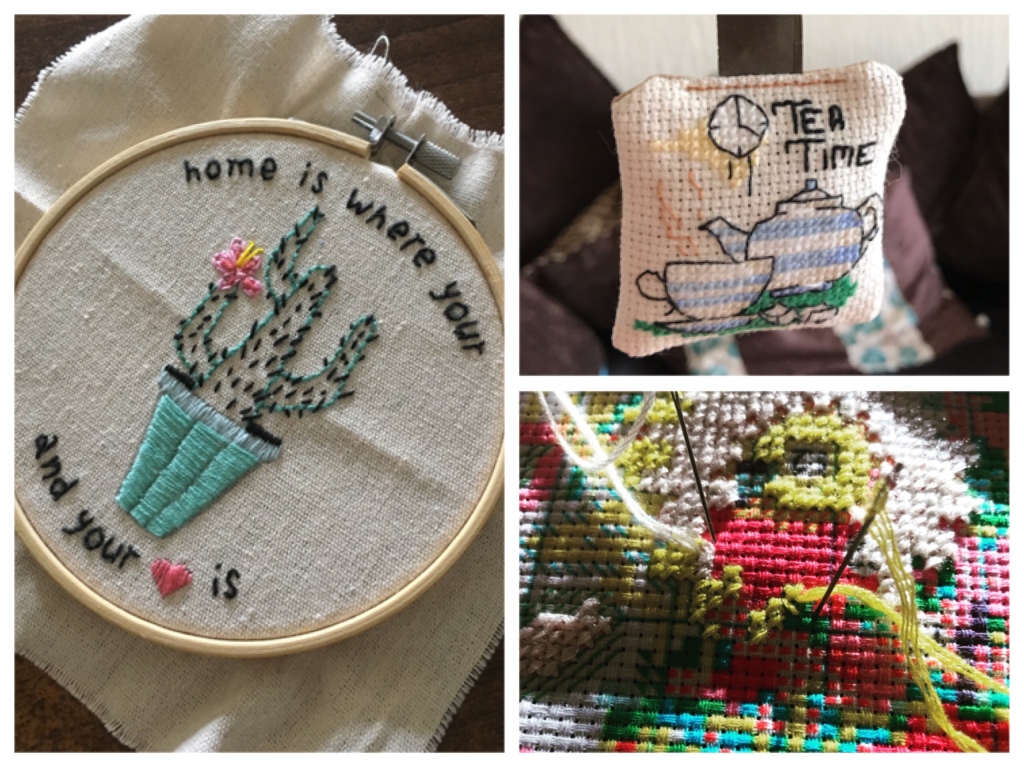 Most recently I made this pair of squishy friends for two of my friends that are having/had babies. And no it’s not a unicorn bunny, it’s a bunny. 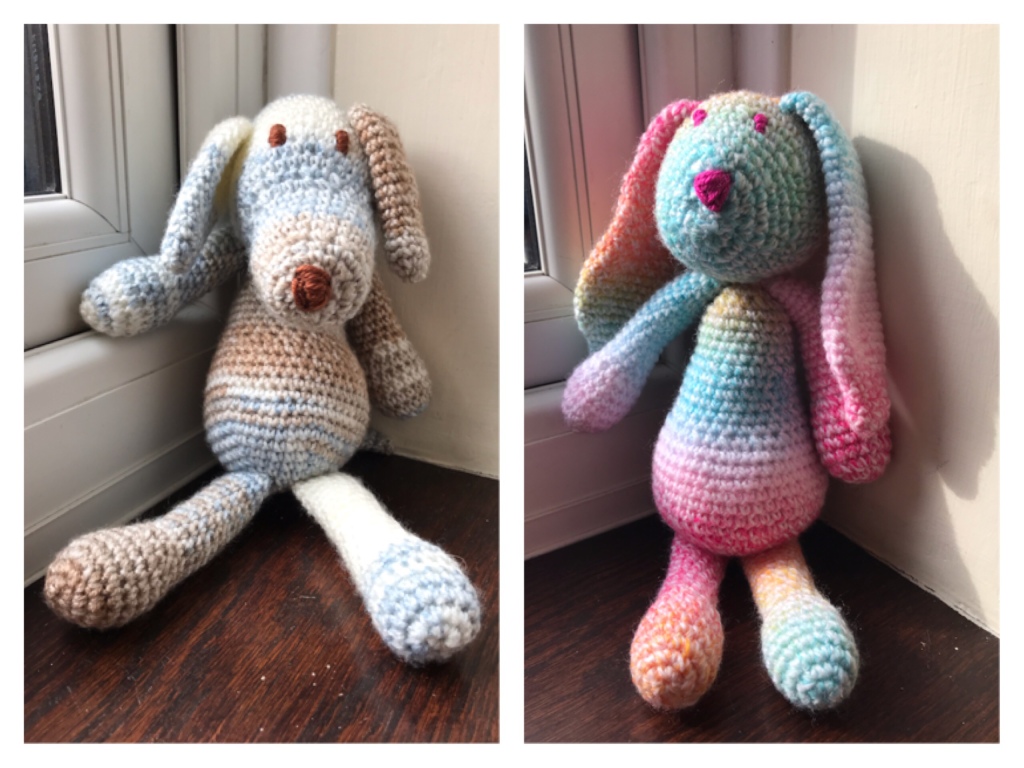 I’m still finding my thing and exploring craft ideas. Not everything is doable or enjoyable, but that’s ok. I have a new venture that I’ve just started. Crafting for a reason, a worthwhile one. You’ll hear more about that soon! 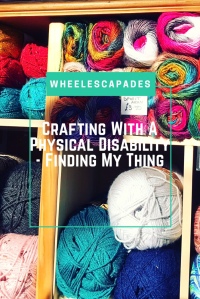 So it seems I've decided to/been persuaded to start a blog. Whenever friends and I are out we always end up discussing, critiquing, analysing where we are and what we are doing. From talking about the food we are eating, the soap in the toilets, the awful bus journey to our destination, anything and everything we encounter. Because of my disability (SMA type2) many of the situations we get into, issues we discuss and laughs we have can be due to wheelchair access. Often me getting stuck in mud or shingle, or me making my way through the most cram packed shop you can imagine, wondering how I am ever going to find the way out again! I aim to write a blog that describes these dramas, tells stories of our laughs, adventures and frustrations, while giving detailed information on accessibility and wheelchair access. Also I like tea. ALOT. The quality of the tea often determines my return just as much as the accessibility. View all posts by gemmaorton

23 thoughts on “Crafting With A Physical Disability – Finding My Thing”