Hannah was late again (see I told you that would be the first line Hannah!). If you’ve been following my adventures for a while you’ll know Hannah is that late friend. We all have one. And if you think you don’t, then it’s probably you. We’ll forgive her this time, again, as it was her birthday. Driving to and around Norwich is also a nightmare. Imagine a life without roadworks….. stop, that life will never be.

I’m a huge fan of comedy, a night out to take you away from your mundane life to hear tales of another’s. A comedian who does this particularly well is Jon Richardson. That’s the style of comedy I enjoy, the chatty kind, the real life observational stuff. Stuff I can relate to.

So when 6 months ago tickets to Jon Richardson’s ‘Old Man’ tour went on sale my friends and I purchased straight away.

Don’t get anxious Jon we didn’t get excited too soon. You’ve nothing to prove! Wheelchair access tickets to shows like this are limited, and believe it or not I am not the only wheelchair user in England, or even Norfolk for that matter (shock horror)! So I always book as soon as possible.

It just so happened that this gig would be on the birthday of said friend above. So planning the compulsory meal before gig was down to Hannah.

Why oh why would she choose somewhere so far away. She knows I’m slow, and I’m not even the slowest of the group! This was my first thought when Hannah said we were going to Prezzo.

What if it rains, my hair, we chat a lot and eat slow, we can’t be late to the show, I hate rushing, I hate lateness, what’s wrong with Ask Italian right by the theatre, Italian is Italian right? All this also ran through my mind.

I’m so glad she chose though. I’ve never eaten in this Prezzo, I actually don’t recall ever eating in any Prezzo. But don’t hold me to that.

It couldn’t have started off any better.

Tombland is a beautiful part of Norwich, known for its stunning old buildings with crooked doors and cobbled paths. One thing Tombland isn’t known for though is accessibility. Wheelchair access and historic architecture don’t tend to go hand in hand.

I’ve got a little invention idea I’d like to tell you about while we’re on the subject of wheelchairs and historic features. I love Norwich, I love its diversity and history. I love England and the history it holds, the centuries old building and streets we have. I feel at home on cobbled streets. But they don’t like me. So what I propose is a cover of sorts. I don’t know how or with what, maybe resin or something. This would cover the cobbles, preserving the beauty and history while making them accessible for all. I’m sure it’s not just wheelchairs, I’ve seen some cyclists come close to death on these things! Or close to my death by crashing into me head on!

Anyways talking of this modernising the historical, keeping aesthetics while allowing access for all. Check out this lift into Prezzo! 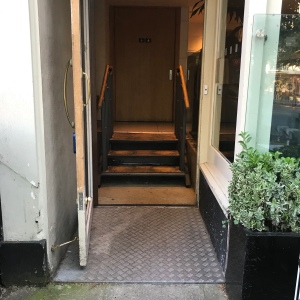 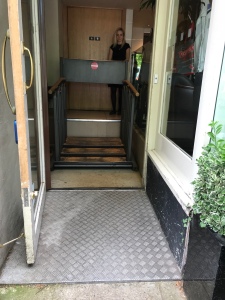 These are the most explanatory photographs I could get, but what you are witnessing is a small flight of steps morphing into a lift. I felt like I was at Hogwarts!

No worries if you’re alone or late to the party though, there’s a little doorbell by the entrance that calls for assistance and a lovely waiter arrives, gadget in hand. At the press of a button the stars are flattened for you to drive onto and be lifted up elegantly. Another entrance still in use for walkers, no queue of onlookers forming. Nothing to see here!

Isn’t this just amazingly inclusive and innovative? You keep the style of the building, no ugly cage of a lift, (because yes lifts are generally ugly). I won’t be over this lift in a long time, sorry if you know me, you’ve probably heard way too much about it already!

Departing my Hogwarts style lift I am facing the accessible toilet, so no need for directions! I’ll tell you more about the loo here.

We are shown to a large round table, oh how I love a round table, why aren’t all tables circular?! Not only are they more sociable, but I’ve also never found one that has caused me difficulties in my wheelchair. One large central leg means that I can drive under easily, the curved shape allowing me to get fairly close.

While waiting for the late ones to arrive we ordered some olives for the table, which turns out not many of us like. Is it a sign of maturity that a person enjoys olives, as they say it is with red wine? I love both, maybe I’m just old.

I order a brew (obviously), and we peruse the menu. 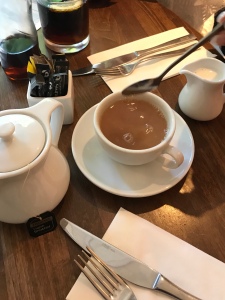 The food was really tasty and the potions very generous! My Penne Gorgonzola had a smooth and creamy sauce with leeks, broccoli, chicken and pancetta. The gorgonzola flavour wasn’t overly strong but it was still delicious. I only made it about a third way through, I had to leave space for dessert you see!

Look at the size of this pizza… It’s not often Lucy struggles to finish a meal! 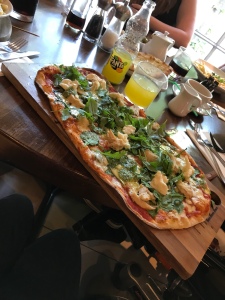 Birthday girl Hannah started off very healthy choosing one of the lighter pasta dishes served with a salad.

That’s until she got to dessert.

The most impressive thing of the whole meal (second to the tiramisu obviously) was the way in which I was treated. As an equal and with respect. I was asked directly what I would like to order, if I wanted cheese, dessert. Eye contact was made with me and I was spoken to. Not my friend or my PA. It was confirmed with me if I’d finished and everything was ok. I know this isn’t much to ask. But you’d be surprised. Apparently it’s easy to assume a wheelchair user doesn’t know her mind. Prezzo and their staff were outstanding. I even tipped, and I’m not an easy tipper!

Time for the show!

This is the third time I’ve seen Jon Richardson live. I’m not quite his stalker but I didn’t just see him for a night out. I know what I’m getting, it’s likely I’ll enjoy it, I like a good moan as much as the next person, and Jon is the king of it.

Enters Jon to ‘Let’s get ready to grumble!’ Yes a PJ and Duncan remix! His tie and cardigan combo is genius. That’s smart yet casual right there!

Although Jon is a different man since I last saw him, his nit-picking style hasn’t changed. Just developed. Pregnant wives and living with them brings a whole load of new irritants!

Baffled by and admitting his own obsessions with technology and social media Jon questions if we all just need a bit more time inside our own heads.

One of the highlights for me was when Jon interacted with audience members. Be warned if you tweet him it’s likely he’ll read all your tweets ever posted. He’s a very thorough guy!

The gig was like having a drink with your buddy, except he doesn’t even take a swig. As apparently there were bubbles in the water jug, and bubbles mean dirt.

I had a brilliant evening, friends, food and a laugh. What could be better?!

Apparently Jon enjoyed it too as he announces Norwich is always near the end of his tour as we are one of his favourite stops.

All comedians say that Norwich is their favourite place to gig. Do they say this to every town at every gig? Or are we in Norwich just fab? Maybe I should go see some gigs in another county, see if he’s just playing us and flattering all the fans from all the towns.

If you’re a comedian, preferably Jon Richardson, are we in Norwich actually the best?

36 thoughts on “Cool Lifts and Cardigans”