I’m terrible with street names, tell me it’s near that Starbucks on the corner, or just past the book shop. It’s opposite the market or where the good chippy is.

I was looking for somewhere interesting to have a birthday catch up with friends (I know I’ve had that surprise tea party, but that was a family do! Plus I didn’t know this was happening at the time.) When I was told by a friend that a new dessert bar/cafe was opening in Norwich on Westlegate.

After a Google map browse I realised where it was.

I always think of it as the street where McDonalds use to be. Forgetting that McDonald’s probably closed 20 years ago and most people don’t remember it. That’s when you know you’re old! I had a google and it actually closed in 2006. Not that long ago people, why don’t you remember?!

I knew where Mindoro was, I just had to hope it was accessible.

The easiest way to do that nowadays is send a message via Facebook. They say social media has ruined us, it’s a danger, yes it does and is. But social media is also extremely accessible in a good way. It allows me to easily and independently contact a venue or event, enquire about access and ask specific questions. I can’t hold the phone for a verbal chat, and to be honest I’ve always found it weird having someone hold the phone for me. Plus I’m just better with written words. They give me time to think.

Mindoro answered promptly, everything was fully wheelchair accessible, toilet included. They even sent me a sample menu. Waffles sounded good!

So described as a ‘Dessert Shop’ they advertise a variety of sweet treats including crepes, waffles, pastries, cakes and muffins. They also sell a small collection of savoury bites including panini and sandwiches. Everything made freshly in store.

Possibly my idea of heaven. Or so I thought…

My friends and I met outside the large glass shop front and easily entered through wide doors. The cafe itself was very accessible and spacious. There was plenty of room inside by the entrance before you reach the seating area. We chose a corner with a comfy bench along the wall and moveable chairs along the other side. The tables could also be moved and we made the most of this by rearranging tables to make one large one. Plenty of space for my wheels and a high chair. Tables were also of my favourite design, with one central leg, easy to get my chair under without any chunky legs in the way.

We had a browse of the menu and it wasn’t quite as extensive as I’d hoped. There wasn’t in my opinion the vast variety of desserts and dishes that the restaurant promoted.

I wouldn’t say the prices were too bad, but that’s before I saw what we got…

I ordered a tea, as did my Mum (who tagged along due to PA sickness). Tea for two arrived in a very large pot. It was actually pretty tasty tea and the pot held enough for almost two cups each. Bonus!

One friend and I ordered the special of the day, bacon maple waffle. They looked good on arrival, fairly large portions. The bacon was really crispy, just how I like it. The waffle was ok but a little dry, I think that’s due to the lack of syrup. The dish was drizzled with such a small amount it could hardly been seen. I don’t like things overly sweet but it would have been nice to have a little jug on the side with the syrup in, that way you could add as you go and control the flavour and dryness. 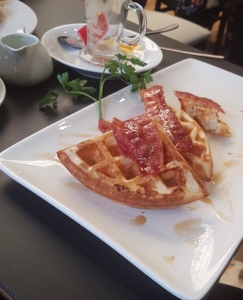 Another friend ordered the cheese and ham panini, she said it was tasty and filled well but hadn’t been grilled long enough to melt the cheese inside.

Friend number 3 chose a tuna mayo sandwich. She received a tuna mayo and sweetcorn panini. Too busy trying to entertain and feed her 1 year old daughter she started to eat. Not really a fan of sweetcorn and preferring sandwiches, she only ate half the panini. There was nothing wrong with the actual dish, but if sweetcorn is in the filling then it really should be on the menu.

Not letting these issues put us off and hoping to give Mindoro a chance to impress us, we ordered some cookie dough stacks. 2 toffee caramel crunch, and 1 white chocolate and strawberry.

They arrived with no cookie dough in sight. Hard, cold, fully-cooked cookie with not very luxurious ice cream in between. Couldn’t break through with a spoon to eat, so had to unstack with our fingers and pick up and bite. At almost £5 per stack, saying we were disappointed is an understatement. We didn’t eat much of them.

They look pretty good in the photos don’t they? I’m not saying they were awful or tasted bad. They just weren’t what we had ordered or expected. When you get excited about gooey cookie dough and hard cookies arrive, you feel like a let down child.

We mentioned all of the above issues to our waitress who then fetched a man I assume was manager or at least in charge that day.

He was not apologetic at all. There was no sorry or compensation offered. We were told ‘lots of trainees are working today’, ‘oh I think they put sweetcorn in the mix’, ‘no we don’t do cookie dough yet the menu is due to be changed in the next week or two’.

The dining area became extremely smoky while we were eating. I didn’t realise until I turned around and the depth of the restaurant was cloudy. Kind of creeps up on you doesn’t it? Like when you’re cooking at home and then walk into another room and realise you can see again. We had watery eyes as we left.

I understand Mindoro is new and I visited within the first month of its opening. This is not a good introduction though and doesn’t entice me back. Which is such a shame. Location, space, access and decor are all brilliant. Hopefully things will improve.

I love trying new places, it’s always exciting when something new opens in your area. I’m up for almost anything. I left Mindoro disappointed though, wishing I’d stuck to the waffles I knew and loved.

If you live in Norwich or are looking to visit then check out some of my other local access reviews.

Pleasure to Eat You – Figbar Norwich

13 thoughts on “Show Me The Dough – Mindoro (Norwich)”