I knew something was going on. I didn’t know what, but I had my suspicions.

It’s my birthday today. I’m 33. THIRTY THREE. When that happened I do not know, but I still feel in my twenties. Not my teens, I don’t want those again.

So on Saturday, last Saturday, I was going bowling with family as an early birthday trip. Choosing outings as a wheeler with nieces aged 2 and 6 can be quite restricted and repetitive. I can’t go on sand, swings or trampolines, the favourite things of children. But I can bowl. Sort of. With the help of a 2 and 6 year old! I use the ramp thingy to roll my ball down, as does the 2 year old. The 6 year old has upgraded to a kind of spin-throw-drop, one that allows the ball to travel so slowly down the lane she has time to sit down and watch or run for a slurp of slushy before it hits the pins. I won bowling… well I beat the kids. I know my place in sports. All the other grown ups beat me.

This birthday treat was planned. But I knew more was to come. Partly due to me being extremely inquisitive (nosey), asking the who’s and where’s of everything. Partly because nobody around me is good at acting out of the know. And mainly because of happenstance and 50 Cent.

This was playing on radio on the drive to bowling. Fact.

You know. That was a tune once. And I was young. Once. Around the same time.

I wasn’t going to be sipping Bacardi though, I would be sipping tea. Much more me!

So I knew my surprise for certain as Mum drove home the wrong way. The way that led to Park Farm. Park Farm is one of those fancy places you can stay that’s like a big house with bedrooms to book, spas to use, a gym, and posh restaurant. Park Farm is also the venue I chose for my 30th birthday tea party. Yes I had a tea party, that’s how cool I am! I hadn’t been here since that day, when 50 of us celebrated my reaching the grand old age of 30 by consuming my favourite meal, afternoon tea.

I had my suspicions of who might be there, and I was close. I wasn’t expecting a private room for 16 though!

The room was lovely and easily accessed. The main entrance to Park Farm (there are plenty of generous parking spaces right outside) has double doors and no step. The lobby is spacious and fresh, darting off in various directions, I was headed down a wide corridor on the right. We arrived at and swerved through the bar, ample space without asking anybody to move. At the end of the bar, just before the open conservatory was a doorway that led to another room, which led to another room, that my guests were waiting inside to surprise me! 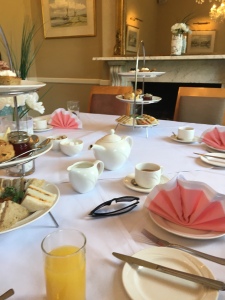 The room was grand with a fireplace, magnificent mirror and chandeliers. Spacious, yet cosy and warming. 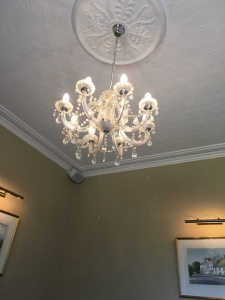 Tables were arranged to create one large sociable table in the centre, everyone seated around. I could easily park with my knees under the table, perfect height with no human or other legs in the way.

As the cake stands appeared my niece’s face lit up ‘oh my goodness’ she beamed!

Tier One – The Savouries

I started with a cheese and pickle sandwich on white bread. Grated cheese, which always feels a little posh. There was just enough filling, more wouldn’t have hurt, but less would have been sad. The pickle was finely chopped, which is my preference. 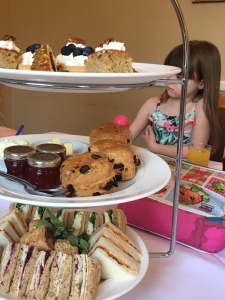 Next I went for the turkey and cranberry, a bit festive but generally one of my faves. The turkey was tender and the cranberry zingy, on malted bread, this sandwich hit the spot.

Then I tasted the sausage roll. This was by far the best thing of the whole afternoon tea, and possibly one of the best sausage rolls I’ve ever had. I enjoyed it so much I stopped eating it and moved on to sandwich filling number three.

Egg mayonnaise and leaves. Sorry but I’m not completely sure which leaves, edible ones obviously. This sandwich was filled to the brim and rather tasty.

Sandwich portions were generous but not replenish-able like some. I do have to say though these were triangle sandwiches with crusts removed. Ok, but they’re not finger sandwiches are they?!

I ended on the remainder of my sausage roll. Yum. I’d happily have another, but there are still two tiers to get through…

I was a little dubious as the fruit scone was being prepared for me. It looked really hard to cut through and crumbled a little. As you know I eat almost everything with a fork, and this scone looked a mission. I managed to eat it once it was cut into cream and jam covered pieces. It was actually really tasty so I’m glad I persevered. The outside was a little too crisp in my option, but the flavour was worth the effort.

As we know (and my Nan use to tell me) I have the appetite of a sparrow. I knew there was birthday cake to come so I decided to doggy bag my mini cakes to eat later that evening and the following day. 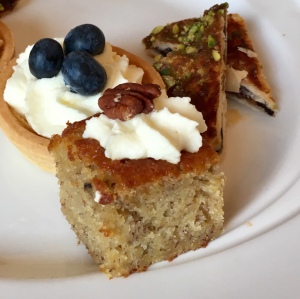 My favourite was the tart. Thin shortcrust pastry filled with a lemon curd, topped with fresh cream and blueberries. This is my kind of dessert, not too sweet, and two of my favourite flavours.

Next up was banana and walnut cake. This wasn’t popular among the party it seemed as I could see pieces left on a few tiers. I really liked the flavour and it was moist. I did have mine the next day though, so maybe it was just too heavy and stodgy for most after eating everything else.

The final cake was named as ‘baklava’. But not as I know it. I usually love a bit of baklava. Gooey, nutty, flakey. This version had sweet mincemeat in and reminded me too much of Christmas.

Although all perfectly tasty cakes I feel it was an odd bunch. The flavours didn’t compliment each other and the tier looked very dull for something served in the midst of spring. A bit of colour or more spring like flavours would have been nice.

Although service was pleasant and waiters perfectly friendly, we did seem a little out of the way in our room. Which was nice, to have our own space to chat and not worry about the children disturbing other guests, but hard to get attention when needed. We were left on our own for long periods of time, which is also nice, not to be harassed by waiters, yet difficult when we ran out of tea. Tragedy! Seriously though we only got one teapot refill and that wasn’t everybody, staff could have been a little more attentive. 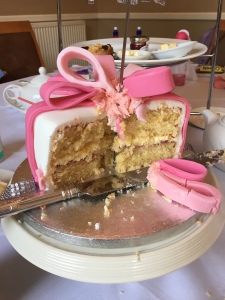 I’ve always liked the idea of being surprised. As someone who is often the planner I’ve wondered what it would be like to just have something thrown upon you, with no clue as to what. To not have to worry about times, confirmation, access requirements. I guess that’s one reason I often do the planning, I worry somebody won’t ask the right access questions (it’s surprising how many staff at venues seem to think a wheelchair is for show, and I’ll just hop up a couple of steps!).

Overall it was great to be on the other side of a surprise. Although I now appreciate the anxiety it can cause if you do have an inkling! What should I wear? Where are we going? Do I need to eat first? Who will be there? I hope I look grateful? Do they serve tea?

I realise I’d have none of the above concerns if it was an actual surprise and I wasn’t so bloomin’ nosey!

Just a little reminder that the Bloggers Bash Awards voting ends on 30th April. I’m a nominee! And it is my birthday…..