I’ve called him stripy. Not the most creative name I know, but he’s one of the stripy kind. The creepiest of them all. The ones with big bodies and tiny crooked legs. I bet he’s hairy too. I haven’t got that close though, only when the glass is between us. When I go outside I avoid eye contact with his multiple little googlies like my life depends on it. I feel physically sick if I see him, that’s not his fault though. He didn’t choose to be a hairy creep that can move in all directions.

That’s what gets me, what really freaks me out. How he can move in any direction, at the speed of light.

They tell me he’s more scared of me than I of him, but I don’t see how that’s possible. I’m not scary. He could crawl all over me and there’s nothing I can do about it. Nothing. He’s probably stronger than me, his webs are. Strength size ratio, he’d beat me legs down. I don’t have two moving legs let alone eight, he moves way faster than me and stairs aren’t an issue. Nor are narrow doors and shingle. The world is is oyster, until somebody whacks him with whatever they have to hand.

That would have been me until recently, not the whacker but the instructor of the whacking.

They always appear when I’m alone and unable to escape. I’m sure they plan it that way. I’ll be sitting in the back of the car and one will dangle down right in front of my face, taunting me, knowing I can’t retaliate. I hated the creepy little ninjas. Until one just made himself at home on my lounge window, then I realised we have more in common than I thought. And I quite admire the little fella.

Yes I say lounge. Funny room isn’t it, the one with so many names. Front room, sitting room, family room. What do you say?

So he’s made himself at home, on my home, and I’ve ended up gazing my day away watching him. Marvelling at his agility and independence.

He’s a hard and talented grafter. There we both are, crafting away, planning our day around what tasty treat might be next. Me with my yarn crocheting an animal. Him with his yarn, spinning a web with which to catch animals.

He gets there in the end though. A little bug hits, it thrashes helplessly, trying to break free, Freddie Mercury style. Stripy abseils down in nanoseconds, wraps his prey in a never ending supply of yarn and stores him for a midnight feast.

He’s using my Netflix subscription, stripy, the thief. Building his house on the window, peering through at the tv. No planning permission sought. He’s watching Netflix while I’m watching him.

Torrential winds and rain didn’t stop him. He’s a tough nut. Every morning I’d check on him through my safety glass, there he was another feast prepared and the overnight weather damage corrected. I think, if only I was that motivated, while I drink my tea and watch morning television.

This little buddy was no quitter.

Until the cat got him. It wasn’t intentional, I don’t think anyway. It wasn’t as you’d expect. How many times have I told my cat to save me from the monster spider and have a delicious snack.

It was her tail that ended it all this time. Our friendship. She swished it a little too enthusiastically and swiped away his treasured web. I don’t think he went down with it, like a captain and his ship. But he hasn’t built another this time. It was no repair job.

Hopefully he’s gone off to pastures new. Maybe he found a window with Sky Cinema subscription. Or he’s off undertaking Halloween duties and will return soon.

All I can say is he better not be in the house, I’m not quite that attached to him. 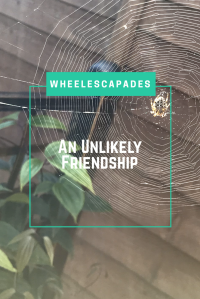 13 thoughts on “An Unlikely Friendship”