It was the Saturday when England played football. The game of the World Cup where England were doing better than they had done in… I don’t know how long… because I didn’t really care. They were doing well though and everyone was having barbecues or going to the pub. It’s been hot you see, we in England are actually having a good summer. I mean in general. Not the football team. *Spoiler alert* they didn’t make the final.

We decided to take a family trip to Pleasurewood Hills. Never heard of it you say? Think of Alton Towers, but lower your thrill expectations just a little. It’s a theme park of sorts aimed at the smaller thrill seekers. Those that like a nice day out without constantly being upside down. It’s great for a family day out as there’s stuff for the kids too.

We were semi planning on going anyway before we knew the big match would coincide. Even better we thought, hopefully everyone will be watching the game, Pleasurewood Hills would be deserted.

Planning a family day out can end up quite expensive, so we started by looking on the website to find out the entry cost.

It was an easy choice for me as after making a phone enquiry I realise there are no wheelchair accessible rides at Pleasurewood Hills anyway. Quite a good option to offer a non-rider I thought. Until I thought a bit more and realised my 2 year old niece was under 1 meter tall therefore had free entrance. There were quite a few rides she could go on.

I hadn’t been to Pleasurewood Hills since the late 90’s I don’t think. And I think it froze the last time I visited. It’s like there’s a weird thing going on with time, and whenever I step a wheel in that place we time travel back to my youth. Woody Bear (resident giant mascot dressed up person) was hanging around, even doing the Macarena at one point and dancing to some Gina G! It felt like those family holidays I had to Pontins as a child.

The only thing that had progressed were the prices. And I’m not just talking about entrance fees, they weren’t too bad really. A slushy was £3, as was a 99 whippy. They really need to change the name of that thing. I’d never have had enough pocket money in the 90’s to buy an ice cream, not after I’d bought the compulsory notebook, ruler or giant pencil in the gift shop! Ha. I’m glad my niece kept that tradition going, she came away with a notebook she’ll never draw in after that week.

I do wonder if all things you do and visit in your youth are frozen to that point. It’s magical then, and nostalgic now.

I’m being a bit mean on Pleasurewood Hills, but maybe that’s because I’m old. I’ve aged more than Woody Bear.

It was a lovely day though, the sun was shining. I loved the parrots. How can you not like a parrot riding a bike? And backwards too! 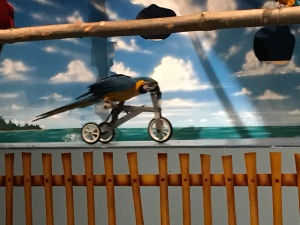 That was one of the on-site-ticket-price-included shows. There were 2 shows on the day we visited, and these run throughout the summer. They are the same shows I remember as a kid! One is a parrot show where we are introduced to a variety of birds and learn about them while they do stunts. The most famous we met had recently starred in Paddington 2. I’d never met a celebrity parrot before!

The second show was a sea lion show. Yes it seems these things are still a thing. I’m not sure what I think about it all either. They looked happy though as they jumped through hoops, balanced a ball and smiled for us! While waiting for the show to begin, the Spice Girls started playing. Pleasurewood Hills really is stuck in my childhood era!

I’m glad they still have the shows that were on when I visited as a child, a teen. As well as it bringing back memories, they were the only entertainment fully accessible to me.

The park itself was brilliant for my wheelchair, open spaces, smooth and level ground. The rides were a different matter.

My younger self was lifted and thrown onto rides, I was afraid of nothing. I’m more fragile now, and bigger. Health and safety is also a thing. Sometimes a very inconvenient thing. Plus I worry about breaking!

I’ve been to Disneyland now too. I know how accessible rides can be if they try. Disney has money though, a lot of it. Woody Bear doesn’t seem so well off.

Watching kids on rides is ok when you’re 33. But I wonder how 90’s me would have felt having not been allowed to or been capable enough to ride with my friends. Knowing the possibility is out there. Knowing rides can be rideable in a wheelchair.

The kids enjoyed it though, it was almost Disney to them. Rides are rides when your 6. Because of our chosen day there were no queues, sometimes they stayed on a ride twice without getting off. Bonus.

We didn’t totally escape the football though. Pleasurewood Hills were showing it on a big screen within their castle theatre. Needless to say we didn’t watch. It was being played on loud speaker in places throughout the park though. Not so good for those waiting till they got home to watch the game! But it did add to the atmosphere. People asking strangers if they knew the score. I’ve never been a fan of football, or any sport really. Except when I was part of the school table cricket team (don’t ask). What I do like is the camaraderie it brings. The bringing together of people, strangers with the same want and desire. The same goal. Ha.

Overall we had a great day, there’s a good variety of attractions. Rides for toddlers, a couple for adults, the thrill seekers amongst us, and plenty for those in between. It’s great that you can break the day up with seeing the shows, which gives those of us non-riders a change of scene.

If you’re local or visiting us in East Anglia then it’s well worth a visit. But unless you are desperate for a dose of nostalgia then I wouldn’t travel the breadth of the UK.